That agreement, signed July 22, was one of the first global monetary policy and currency agreements —re-establishing a gold standard for exchange rates, backing away from competitive devaluations and setting up the International Monetary Fund to bridge balance of payments gaps.

But as the Bretton Woods pact turns 75, that spirit of cooperation, whether on exchange rates or trade, is waning. Trade protectionism is on the rise, nationalism, and unilateralism is championed by U.S. President Donald Trump - who says the rest of the world is stealing from the United States via competitive currency devaluations against the dollar.

And so the July 17-18 meeting of G7 finance ministers and central bankers in the French town of Chantilly could well be a fraught one. Taking place at the same time as IMF and World Bank heads join ECB officials in Paris to commemorate Bretton Woods, G7 discussions will focus less on the past and more on how to resolve pressing problems such as the world economy, Sino-U.S. trade tensions, fair exchange rates between the major economies, U.S. anger over France’s plan to tax tech firms such as Google, and Trump’s threat to slap levies on European autos.

Other issues on the table include tax havens, cyber security and Facebook’s proposed new coin Libra that has enlivened the debate about regulation of cryptocurrencies. 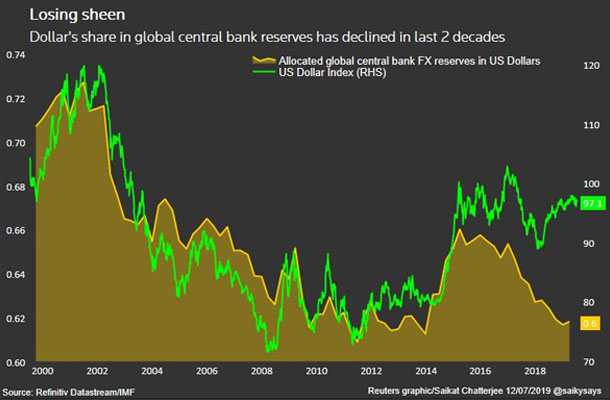 China’s economy and businesses are showing more visible signs of pain from the trade war, as recent data on producer prices and exports revealed. Monday’s GDP data, no matter how well-massaged, could show quarterly growth at its weakest in three decades and raise doubts over a government aim to keep 2019 growth in the 6-6.5% range.

Beijing’s monetary and fiscal stimulus has hitherto been a fraction of what it was during the 2015 downturn. The Government is clearly wary of encouraging another property bubble and reckless rise in investment, both of which were targeted during the 2017 campaign to cut leverage.

But, with worsening economic headlines, falling corporate investment and a looming Fed rate cut, the People’s Bank of China cannot merely be operating behind the scenes through local government spending and liquid money markets.

Many expect that a bold, symbolic statement about Beijing’s policy easing intent is needed  —most certainly if the Fed also cuts at the end of July. Even though that may just involve the customary, token 10 basis points cut in China’s benchmark one-year 4.35% policy rate. 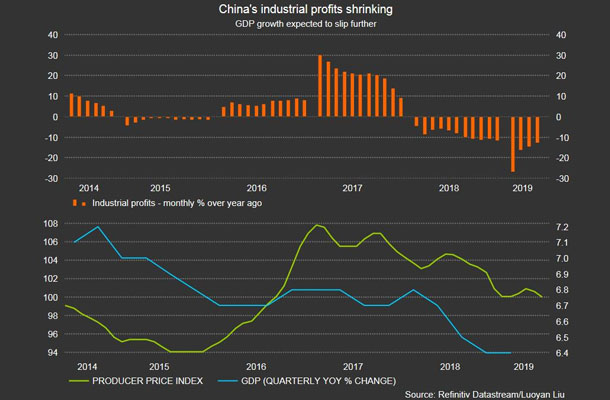 Puede interesarle: OPEC may not be dead, but it is not what it was before

Investors are anxious to take the pulse of Wall Street and Europe Inc to check if second-quarter results justify record U.S. stocks and Europe’s best first-half share performance in more than two decades.

Profit warnings from German blue chips BASF (BASFn.DE) and Daimler (DAIGn.DE) have hit confidence as the reporting season kicks off in earnest next week. Expectations are already low as analysts continue to take a red pen to their estimates.

With valuations stretched and lingering worries about the economic impact of protracted U.S.-China trade tensions, disappointing results could pour cold water on the rally. U.S. earnings are seen contracting by 0.3% year-on-year, its weakest performance in three years, according to data compiled by I/B/E/S Refinitiv. That’s down from 1.6% growth in Q1. Companies on Europe’s benchmark STOXX 600 will report growth of 0.8% for the quarter, data shows, an improvement from the 2% drop in Q1 but down from 1.8% growth expected just a week ago.

Full-year expectations are dimming as well: consensus based on the MSCI index pegs FY earnings growth for Europe at 4.1% - the lowest since 2016 and half the levels forecast at the start of the year. For the United States, it is at 2.7% vs 7.5% in January. 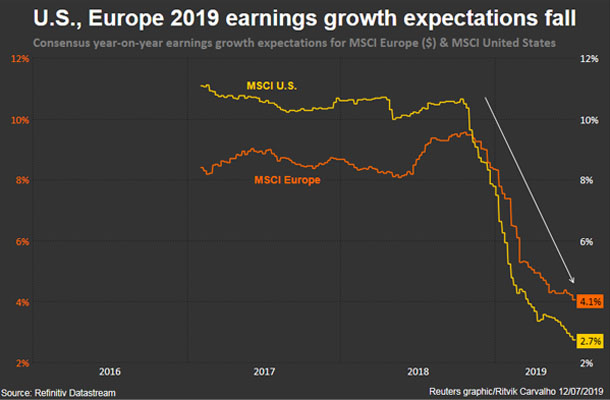 Just when you thought there may be a glimmer of hope on world trade as talks between Beijing and Washington resume, raising the possibility that the world’s top two economies could clinch a deal, the tariff heat switches to Europe.

On Thursday, French lawmakers approved a tax on big tech companies, potentially opening up a new front in a trade row between Washington and the European Union. U.S. President Donald Trump has ordered an investigation into the French tech tax plans, a probe that could lead to the U.S. imposing new tariffs or other trade restrictions.

And there’s already lots of shuttle diplomacy going on: German Economy Minister Peter Altmaier, after meetings in Washington on Thursday, predicted a 50-50 chance of averting U.S. auto tariffs and that it will take weeks or months to resolve at least some of the thorny trade disputes clouding U.S.-European relations. Never mind all the differences over issues such as aircraft subsidies, car imports, and the Russian-led Nord Stream 2 gas pipeline.

Markets worried over the impact of trade wars on the health of the global economy will be watching closely for progress and deterioration on all those trade war fronts in days to come. 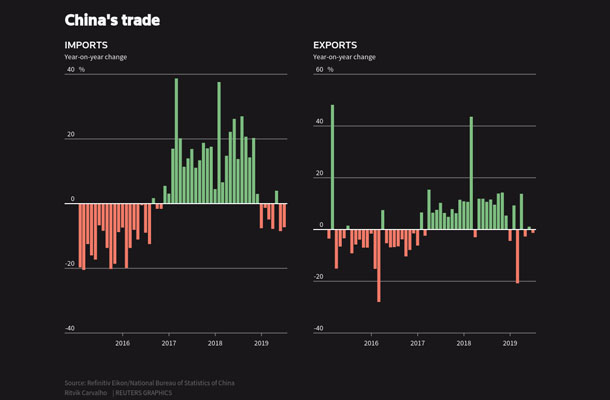 Losing support from monetary policy expectations, the already battered pound faces a tough week ahead. Key economic data such as earnings growth, inflation, and retail sales will be closely watched by markets desperately trying to gauge where interest rates might be in a couple of years from now.

Markets have nearly priced in a Bank of England rate cut over the next 12 months after Governor Mark Carney signalled he could be about to join other central banks in cutting rates. Economists expect year-on-year inflation for June to come in at 2% on Wednesday. But if the reading falls below the central bank’s target rate of 2%, chances of a rate cut may rise.

Brexit of course remains the elephant in the room and is the main reason why sterling has fallen by 20% since June 2016, with the country gearing up to hear who the country’s next prime minister will be on July 23. 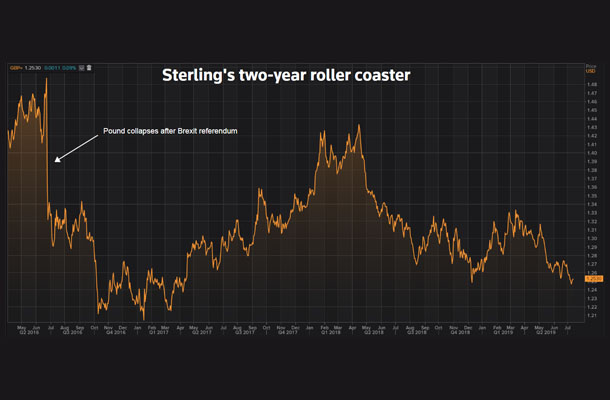